Ever since the November 2 Oakland General Strike which brought out tens of thousands of people culminating in the shut down of the Port of Oakland, folks within the Occupy Movement have been talking about the usefulness of Blac Bloc style tactics.. In Oakland the debate was full steam and contentious around an issue called ‘diversity of tactics’ . This was the result of the disastrous outcome to a successful General Strike, when a group under the guise of diversity of tactics attempted to take over an abandoned building ran into police who pulled no punches. The end result was broken windows, fires in the streets, local businesses looted and graffiti all over downtown. The damage was courtesy of those who were initially and erroneously labeled ‘The Blac Block’.  Since then many of us have come to learn Blac Block is a tactic not a group or organization. We also know that its not the exclusive domain or tactic of folks who identify themselves as anarchists.

With that in mind, the tactic of breaking windows and kicking up dust to make a point is one that is being fiercely debated within and outside the Occupy Movement.  Some are saying if it wasn’t for the aggressive tactics, people would remain docile.. The movement would be ignore. Others are are emphatically claiming that the aggressive tactics are hurting the movement..  Below are two articles that address this issue…

The first is from veteran journalist and former NY Times columnist Chris Hedges... Its a stinging rebuke of those he says are associated with the ‘Blac Block.. He called it a Cancer of the Occupy Movement. It initially appeared in Truth Dig…

Black Bloc adherents detest those of us on the organized left and seek, quite consciously, to take away our tools of empowerment. They confuse acts of petty vandalism and a repellent cynicism with revolution. The real enemies, they argue, are not the corporate capitalists, but their collaborators among the unions, workers’ movements, radical intellectuals, environmental activists and populist movements such as the Zapatistas. Any group that seeks to rebuild social structures, especially through nonviolent acts of civil disobedience, rather than physically destroy, becomes, in the eyes of Black Bloc anarchists, the enemy. Black Bloc anarchists spend most of their fury not on the architects of the North American Free Trade Agreement (NAFTA) or globalism, but on those, such as the Zapatistas, who respond to the problem. It is a grotesque inversion of value systems. 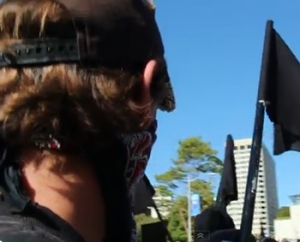 The next article is a slamming response to Chris Hedges article by Don Gato. Its a titled:  To Be Fair, He is A Journalist: A short Response to Chris Hedges on the Black Bloc …Among the things that stand out is the author correcting the blatant mislabeling Blac Block/ Anarchist etc…Its also noted that in Hedges critique he never once mentioned the over the top brutality delivered by OPD on unarmed peaceful demonstrators..

Here’s some of what Don Gato wrote…

First, we need to clear up some definitional problems. Now, as a journalist, I really don’t expect Hedges to be able to “research,”—it does seem to go against the prime directives of the profession, but let’s be clear: There’s no such thing as “The Black Bloc movement.” The black bloc is a tactic. It’s also not just a tactic used by anarchists, so “black bloc anarchists” is a bit of a misnomer—particularly because Hedges doesn’t know the identities of the people under those sexy, black masks. In fact, it was autonomists in the 80s who came up with the (often quite brilliant) idea in Germany. Protecting themselves against the repression of what Hedges calls “the security and surveillance state,” squatters, protesters, and other rabble rousers would dress in all black, covering up tattoos, their faces, and any other identifying features so they could act against this miserable world and, with some smarts and a sharp style, not get pinched by the pigs. This was true of resisters who were protecting marches (because the state never needs an excuse to incite violence and police are wont to riot and attack people), destroying property, or sometimes just marching en masse. That is, the black bloc has all kinds of uses. And in Oakland, where Hedges seems particularly upset by people actually having the gall to defend themselves against insane violent police thugs instead of just sit there idly by getting beaten, on Move-In Day the bloc looked mostly defensive—shielding themselves and other protesters from flash grenades and police mob violence with make-shift shields (and even one armchair). So, to be clear: The black bloc is a tactic used by lots of people, not just anarchists, and it has all kinds of uses. It’s not a “movement.”

We urge folks to read the article in its entirety as its very insightful at: Facing Reality

Another article of interests that responds to Chris Hedges is one written by Diane Gee its titled: Perspectives on Hedges Cancer in Occupy… She pens the following:

Other than ONE window and one Flag, which mind you, is property damage not violence per se; not one act of violence has been recorded by Occupy or the Black Bloc he wishes to malign that has not been the result of DEFENSIVE maneuvers.  When attacked?  They have thrown a few stones, have tossed back a few tear gas canisters; mostly what these young men and women have done is offer their bodies up as a defense line, and taken the hits so that the weaker are saved: the women, children, old people may run to safety while they defend them with meager trash can shields.

The injuries and unfair arrests, the abuses of law by the Police however, have been widespread, vast, recorded, and yet barely spoken to by the MSM.

Yet?  To Hedges?  These few acts of defiance by angry young men are enough to bring the movement itself to ruination.  Let us not forget that since the beginning of time it is always the elders who cool the heated blood of the youth and try and direct their tactics to a more effective use of their energies.  Old warriors know when to wait.  In some ways, though?  It is good for the powers that be to know, via a small warning shot of a broken window or burned flag, that we are deadly serious.  There has been no wide-scale violence except that done by the Police.  There have been no riots or burning cities.  No 1%er or defender of the 1% have been killed.

What Hedges has done here, presumably without intent, is work to divide Occupy.

Today many of us woke up to seeing a video posted by folks from Anonymous warning those who employ Blac Block to chill out..

Let Us know your thoughts on all this??