Happy 70th Birthday Huey Newton-Co-founder of the Black Panther Party for Self Defense…which sadly was destroyed by the FBI’s infamous Cointel-Pro Program  Newton was born February 17th 1942 in Monroe, Louisiana  and died in Oakland California  Aug 22 1989 after being shot by a drug dealer.. Below are a couple of videos that exemplify the brilliance and commitment Huey had for the struggle to liberate Black people.. Its important folks in 2012 remember that Huey Newton was more than just a song about weed done by Whiz Khalifa..

They say a picture is worth a thousand words and nowhere is that more true than yesterday’s GOP Hearings on Birth Control for Women..The official name was the Oversight and Government Reform Committee..As you can see seated at the table are 5 Men..All telling the country and the rest of the world how women should handle their bodies… maybe it was an oversight or just plain ole arrogance.. In either case there’s simply no excuse for this.

The GOP is trying to spin this as religious freedom issue not a women’s issue which is just as bad.. Because again–‘Where are the women?’

As was noted in this recent article.. two delegates walked out of the hearings..

Delegate Eleanor Holmes Norton and Rep Mike Quigley walked out of the hearing.

They joined social liberals in a chorus of demands to know why women weren’t better represented among the ten-person panel organised by committee chairman Darrell Issa, R-California.

‘Where are the women?’ House Democratic leader Nancy Pelosi asked when the hearing was brought up at a news conference.

‘The Republican leadership of this Congress thinks it’s appropriate to have a hearing on women’s health and purposely exclude women from the panel,’ she said.
Read more: http://www.dailymail.co.uk/news/article-2102411/Birth-control-hearing-Capitol-Hill-led-male-panel.html#ixzz1meVbcg3S 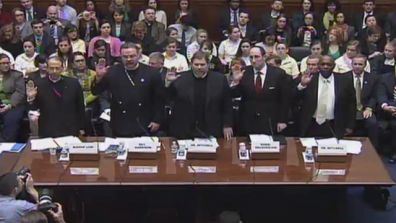 We had a great set this past week on All Day Play FM..as we continued digging in the crates and playing some great jams spanning all types of soul and funk genres..   We went digging in the crates and kicked things off with a classic joint from Berkeley based Digital Underground affiliated Mod Squad ‘I Want U 2 C‘. Its off the hard to find ‘People’s Park’ album…I wonder what ever happened to those guys, they were way ahead of their time.. They reminded me of Digable Planets keeping in mind I heard them b4 DP..  Rocked another crate digging classic ‘Educated Fool‘ by crooner Billy Storm of the Valiants..Don’t sleep on Mr Storm..

Bronx River Parkway, Ray Barretto and Sound Defects continue to be staples in my most recent playlists.. Nothing beats timeless music.

The highlight for this week was my remix of Jimmy Ruffin‘s classic ‘What’s Become of the Broken Hearted‘.. In this remix we rocked the eulogy for Malcolm X as recited by the late great actor Ozzie Davis..

Finally found good digital copies of former Def Jam acts Downtown Science..featuring Sam Server and Boscoe.. It was a relief to finally rock a few songs of their one and only album that wasn’t on an overplayed, low sounding scratchy vinyl..

Here’s this weeks playlist and link to the show Enjoy