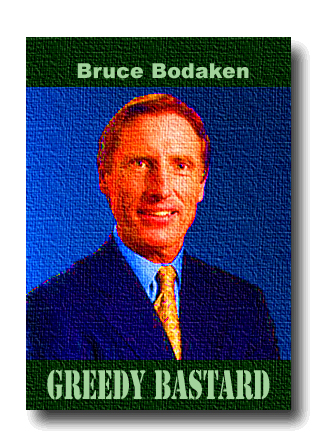 Our Epic Failure of the Week is Bruce Bodaken, CEO of Blue Shield of California.

By now most folks in the great state of California have heard or read the reports about how Bodaken and his company are pushing to raise their rates a whooping 59%. This will be Blue Shield’s 3rd rate hike since October and will impact close to 200 thousand families. This means someone who has a monthly premium of $271 will pay $431.

Yesterday on the TV, news segment profiled a family whose rates were going to jump 73%-Unbelievable. Its bewildering.Unemployment is at all-time highs, families are increasingly having their homes foreclosed on.. times are rough. But sadly I guess one should not be surprised knowing that for most of these companies and their CEOs it’s all about the money and never about the well-being of the people.

We’re particularly surprised and disappointed that Bruce Bodaken is heading this ship since it wasn’t too long ago that he stepped out and said he wanted Blue Shields to offer having some sort of Universal Health coverage. He thought it was important that the uninsured be covered in some sort of affordable way.  In his 2005 interview with the SF Chronicle he said this;

Our original proposal is still very close to what we believe ought to happen. We call it universal coverage and universal responsibility. The idea was that employers, employees, individuals and government all have a responsibility to participate in providing good health care.

About a third of the uninsured are people who can afford health insurance and simply don’t take it. We call them the young immortals.

For those folks who can’t afford full coverage, we need to provide some kind of subsidy. We still think that kind of program makes the most sense, but we’re not politically naive. We recognize that it would be very difficult. Given the budget constraints in California and, for that matter, in America, having such a program in the near future is not likely.

There is a way of getting a million or 2 million kids in California covered if we were to put programs in place.

California’s new insurance commissioner Dave Jones has called Bodaken to delay on the rate hikes. We’ll see if that happens.

Jones noted that’s all he can do.. He’s not in position to stop the rate hikes, but we as concerned citizens can. Lets start by calling our state reps and demanding that laws be put in place to cap rate hikes. In the past when this was proposed now former Governor Arnold Schwarzenegger nixed it.

We can also get behind Congresswoman Lynn Woolsey (D-CA) who just introduced a bill to establish a robust public health insurance option as a supplement to the Patient Protection and Affordable Care Act. You can peep the option HERE