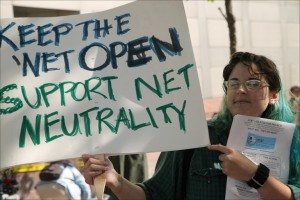 For the past 5 years.. we’ve been relentless about getting information out to our community about Net Neutrality. We’ve written lots of articles and posted up lots of videos on the subject. We know it’s not a sexy subject and for many its hard to understand, yet it’s the most important thing effecting Free Speech. In a nutshell, large corporate interests are on a mission to suppress the flow of information from the masses.

The topic of Net Neutrality being confusing, boring and off-putting has been deliberate. There’s lots of money.. we’re talking billions of dollars if Net Neutrality is deaded. This is why the  big telecoms like AT&T, Verizon and Comcast have spent almost a billion dollars lobbying  to get rid of it.

There’s also huge opportunity to make a small handful of anointed people and organizations gilded information gatekeepers or the beneficiaries of huge sponsorship for conventions and other projects provided they saddle up with the telecoms and use their political and social capital to make this a non issue, keep folks in the community confused or in some cases aggressively advocate.

For years one of the strongest supporters of Net Neutrality was Google.. They had promised to never be an ‘evil company’. A couple of months ago they stunned everyone when they sat down with Verizon, one of the strongest proponents of ending net neutrality.. The pair came up with a proposal to bring before the FCC in a last-minute attempt to scuttle a vote by congress on the issue.

In the proposal Google said it was important to keep Net Neutrality in place on PCs, but it was every man  or this case every company for itself in the wireless world.. They proposed getting rid of this protection.  Their proposal drew widespread criticism and set off a firestorm of protests including one that drew several hundred in front of their Mountainview Headquarters. Google insisted that their proposal would work great. Some wanted to believe.

Here we are the day before a historic vote by the FCC to decide whether or not to keep Net Neutrality and now the longer game plans of the telecoms are coming to light. They are already drawing up pricing schemes to start charging cell phone users usage by the page view and by the use of certain features  like using Youtube, Twitter or Facebook. We’ve already seen companies saying they are dropping unlimited data packages. This is why.

The argument these telecoms have put forth has been too much bandwidth is being used.. Thats BS.. What’s their seeing is all these new , faster, more efficient applications being used and the potential for a handful of companies to score big..

we encourage everyone to check out this article laying out some of the details..from Wired Magazine

Sadly deading Net Neutrality goes beyond money. It’s also about maintaining power and influence which has led companies like Google to quietly do things like create a tier system for news and information. Long time Tech columnist Zennie Abraham of Zennie62.com pointed this out a few weeks ago when he pointed out that ‘legacy’  (corporate) news outlets were pressuring telecoms and companies like Google to separate their product from blogs who were beating them to the punch in covering and uncovering many stories.

Zennie pointed out that almost overnight thousands of blogs not only lost their traffic, but revenue as Google moved to place corporate backed news operations on the front page of their search engines and blogs and other entities in a another section not readily available or known to the general public.  What’s crazy is that you cant even pull up the several columns that Zennie actually wrote on his own blog. It only shows up on outlets that picked up the story such as Seattle PI which links to this story.

Overnight you found topics that were almost exclusively driven by bloggers disappear only to see corporate back outlets take their place. So take a topic like ‘Oscar Grant‘. You look up his name in Google News and all you see are the mainstream media who was the subject of harsh criticism and even protests by community members for with holding crucial information, demonizing Oscar, being embedded with the police during protests and in recent days being a cheerleader for Johannes Mehserle, the former cop convicted of killing Grant. Almost overnight we no longer saw in Google search engines outlets like Indy Bay which was by far the most popular go to place for Grant information.

The Final Call which covered this extensively disappeared. My two sites disappeared as well as Youth Radio, Oakland Local, Oakland Seen, Block Report, Black Hour and about half-dozen other sites that were doing round the clock coverage.  What get eliminated from the discussion is the investigative work by these independent journalist that discovered Mehserle’s violent past which was pretty much ignored by Mainstream Outlets. What was missing were the stories of innocent people arrested and roughed up by police  who were out during the protests and were umbrelled as rowdy destructive people..

The blogs and independent stories told the harrowing stories experienced by people like Civil Rights attorney Walter Riley and community elder who was arrested in front of his office or Joseph Anderson a journalist who was recently arrested without warning while actually on the air reporting. Those and many other stories disappeared.

Suppression and omission of information is what’s going on as we move in a direction of deading Net Neutrality. If the FCC votes to give control to these corporate giants we can expect to see this increase even more.  Today its the bloggers doing politics, but soon if not already it will be independent artists, whistleblowers and any number of folks who feel they need to get information out  but find themselves handcuffed. This is happening now.. We hope folks pay attention to tomorrows vote there’s a lot at stake.

Be the first to know. The SavetheInternet.com Coalition has set up a streaming website where you can witness the vote as it happens, beginning at 10:30 a.m. ET, Tuesday, Dec. 21:

Watch the vote on Net Neutrality:www.SavetheInternet.com/FCCmtg

Join us online to watch the vote and connect with others. We’ll be hosting an online conversation with hundreds of other Net Neutrality supporters who are working together to protect the open Internet.

If you plan to be in Washington on Tuesday, you can come to witness the vote in person. It’s open to the public. I will be outside the meeting with other Free Press staffers to meet with Net Neutrality supporters and pass out information. Come see us and get an “I Support Net Neutrality” sticker to wear into the meeting:

(If you plan to attend in person, please come early. We expect a full room.)

More than 2 million people have urged the agency to create real and lasting Net Neutrality protections. We can’t let FCC commissioners turn their backs on us and vote with Comcast and AT&T.