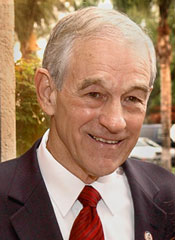 4 comments on “Will Ron Paul bring the Revolution to Congress & Audit the Feds?”