Lots of folks have been weighing in on Kanye.. I definitely have my thoughts, but I also wanna share the thoughts of my good friend  and fellow Adrienne Marie Brown.. She penned an Open Letter to Kanye …Below is one of the highlights.. You can and should peep the entire article at http://adriennemareebrown.net/blog/?p=1667

you stepped back from the single most awesome scandalous thing you have ever done. when you stood there after katrina and spoke the truth, that “george bush doesn’t care about black people”, and you spoke about racist media coverage of those trying to survive in new orleans, it was a powerful and necessary action. you spoke for many of us – i was so proud of you, using your access to millions to speak a truth that wasn’t to benefit yourself.

In other news.. Kanye west pulled the rug from under the Today Show by cancelling his scheduled concert on Friday Nov 26th. he announced that for obvious reasons.. He was out.. He really feels Matt Lauer and the Today Show set him up and he’s not having it.. I wanna give Kanye props for taking a stand against main stream outlets, but this cat is likely to change his mind and show up just as everyone is cheering for him.

In any case, I’m glad Kanye is beefing with Matt Lauer and not another rapper, but who knows what’s really going on.. Wouldn’t it be something if this beef was manufactured

There’s an old saying that goes; ‘everything is political and to not be political is political’. I couldn’t help thinking this when I saw Kanye West on the Today Show the other morning apologizing and offering an olive branch of sorts to former President George W Bush for the stinging remarks he made in August 2005 during a Hurricane Katrina telethon.

West is quoted as saying to host Matt Lauer “I would tell George Bush in my moment of frustration, I didn’t have the grounds to call him a racist.”

For those who don’t remember, during that telethon Kanye  asserted that ‘George Bush doesn’t care about Black people‘. It was the remark heard all around the world and unlike the Dixie Chicks who suffered a huge backlash 2 years earlier, for  saying they were ‘ashamed of George Bush’, Kanye was greeted with open arms. For those watching the telethon and juxtaposing it with images of stranded mothers and grandmothers on rooftops while plane loads of abandoned dogs and cats were shipped away from the flooded city, Kanye’s remarks were cheered rather than jeered. They resonated. He was a source of pride and a hero to those sitting on rooftops watching loved ones being swept away, who had no voice.

Kanye West apologized to former President George Bush. Many ask was that the right thing to do?

Kanye became even more of a hero, with each passing day as more information about the horrors that went on New Orleans surfaced including; vigilante killings of fleeing Black residents in the Algiers section of the city and rogue police shooting and killing unarmed residents as they attempted to cross the Danzinger Bridge. He was the who spoke truth to power at a time when it was surely needed. His words became the chorus in songs and the centerpieces for audio sound collages like the one we did a few days after  spoke out. (Kanye West vs George Bush the Katrina Mix) http://www.swift.fm/mrdaveyd/song/60030/

For many who watched Kanye’s apology on the Today show, it may have seemed like a gracious gesture and a sign of him maturing especially in the aftermath of the Taylor Swift controversy where he interrupted her acceptance speech during last year’s VMAs.

It may have also seemed like a wise thing to do because President Bush seemed really angry 5 years after the fact. He said Kanye’s remarks were the most disgusting thing he had to endure during his presidency.

Bush when shown the video of West apologizing from a soon to be aired Today Show interview of Kanye, Bush seemed to lighten up and said he appreciated Kanye reaching out. The former president said he wasn’t ‘a hater’.

It’s easy to see while one would see the apology as good thing,unfortunately, George Bush and for that matter Kanye didn’t sit through 5 days of excruciating testimony during the one year anniversary at the Hurricane Katrina and Rita International Tribunal. They didn’t hear the tales and see the tears as people told these horrific stories of mistreatment, violence and neglect that left us wondering if we were actually living in America. 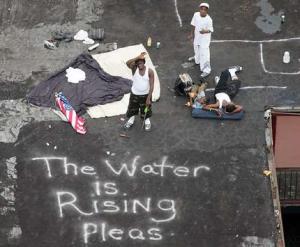 Instead of getting 'disgusted' at Kanye, perhaps George Bush should've been disgusted with himself and apologized to Hurricane Katrina survivors

Had Bush heard some of these stories that were the result of his oversight and slowness to act being mad at Kanye should’ve been the least of his concerns. Instead of lambasting the rapper, he should’ve been on TV offering an olive branch to the people of Katrina.

Hell had he really bore witness to the Katrina horrors he might’ve been moved to offer all proceeds of his book Decision Points to Katrina survivors. And just on GP, Bush should’ve apologized for the insensitive remarks his mamma Barbara Bush made when she met survivors who had fled to Houston. Upon on meeting them she suggested that staying in the Astrodome was a good thing since they were underprivileged.

Had Kanye sat through the tribunal, he would’ve still been mad and upon hearing Bush was disgusted with him for  suggesting he was a racist he might’ve been inclined to stick to his guns and give the former President and war criminal the middle finger with no regrets.

Kanye let George Bush off the hook, but has Bush done the same for those he transgressed on?

Kanye apologizing to Bush, let him off the hook which is too bad because George Bush never let any of the folks he smashed on off the hook. As Governor of Texas he never let those he allowed to be executed off the hook, even when there were mass protests and compelling questions around their innocence

Bush as a former president clearly understood the importance of symbolism and how his every word and gesture would have meaning. He admitted to that during his Today Show interview. Apparently in his mind letting folks off the hook would be a sign of weakness and him being indecisive versus him being thoughtful. Because George Bush had tunnel vision a whole lot of folks paid a heavy price both here and abroad.

Folks forget that Bush refused to allow photographs of returning dead soldiers. His people and his supporters were real quick to shut down and label anyone who spoke out counter to the narrative they offered after 9-11 and later at the start of the Iraq war as unpatriotic. Bush was the type of cat who would not shake the hands of a foreign head of state like Hugo Chavez or Fidel Castro, because he knew such a gesture would symbolize his support.

One would assume that Kanye being in the music industry would also understand symbolism. After all, he’s already been on a rampage about the interview noting that Lauer made him look bad in the way he set up the questions and framed the conversation. Kanye said hes done with media.

With all this in mind, including his outburst, which may be or may not be calculated he had to know, like it or not that when he spoke out against Bush in 05, he was giving voice to a whole lot of folks who really needed it.. This was a good thing. It forced a dialogue and may have helped push things along, primarily because his words were captured all over the world and raised important questions. While it’s true, nobody asked him to speak on our behalf that fateful day, but since he did jump into the arena, many feel he needed to take the weight and NOT signify to an oppressive former president everything was all good when Bush hasmade no move to repair the damage done.