Media is mind control has long been a sentiment held by  folks who felt that deliberate distortions and mischaracterizations my broadcast media was a weapon that led to entire communities being dehumanized. We saw this take place in winter of 2004 when Hot 97 deejays got on air just two days after what many considered to be the worst natural disaster in history and made fun of the 200 thousand people who perished.

The Hip Hop community was outraged and came after Hot 97 led by an organization called REACH.. a big rally was held in front of the station where all sorts of artists and activists came out and spoke truth to power. Among the speakers was  Hip Hop pioneer Afrika Bambaataa and long time activist and former Green Party Vice presidential candidate Rosa Clemente. We married their powerful words to some remarks made by Minister Louis Farrakhan on media and the way it influences people’s thinking.. Opening up the mashup is media justice advocate Malkia Cyril

The Root has been doing a series on our beloved city of Oakland.. One of the topics they tackled dealt with the long marriage between Hip Hop and political activism. Now of course an entire book could be written on this.. LOL I damn near wrote one when writing this.. The original article I penned for this series was around 5000 words , which was way too long and just too much to read in one sitting, But hopefully folks get a small taste of what goes on out our way… 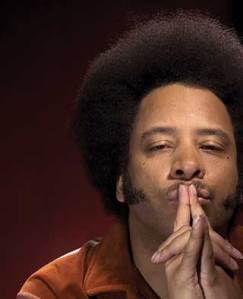 Boots Riley of the Coup

One of the hallmarks of Oakland, Calif, is its activism and politics and its longtime alignment with hip-hop culture. When I say “aligned,” I’m not talking about a rapper doing a song where he spits a couple of cool verses with a socially relevant message. Don’t get me wrong; that’s important, too, but that’s just surface stuff. Political involvement requires much more. As a radio journalist, writer and activist who’s been living in Oakland for the past 22 years, I feel privileged to live in a city where hip-hop and political activism are so closely linked.

The attitude in Oakland is that everything is political. Even being apolitical is political. Folks understand that politics is a rough-and-tumble sport; a closed mouth doesn’t get fed. Here, the end goal is not just getting the chosen one elected into office. Holding folks accountable is paramount, and going beyond the limits of electoral politics is how many see the political landscape. Voting is a tool, but not the only tool to bring about change. Hip-hop is another tool, a potent way to communicate with the masses.

Shout out to my homie J Smooth for posting this up…Yes there are many reasons to be scared of Christine O’Donell and her Tea Party ilk.. What’s even scarier are all the people who could stop her who simply won’t for some very weak reasons..