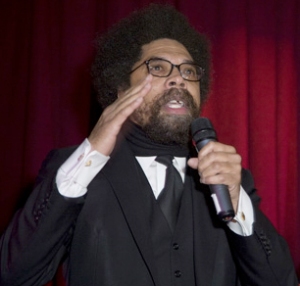 It’s always enlightening to catch up with Princeton Professor and author Dr Cornel West . Many of us know him for his books ‘Race Matters‘, ‘Democracy Matters’ and ‘Keeping Faith: Philosophy and Race in America’ to name a few. He always has some keen insight to loan and he’s good at breaking down complex issue for us to understand. He also comes from a place of love and compassion. He truly wants to see us do better.

We caught up with him the other day and spoke to him about his recent projects. Currently him and long time friend and fellow author/ activist Tavis Smiley are doing a radio show they just launched called Smiley and West.He also finished up his autobiography. He’s also doing some work on an academic book about  Jay-Z

During our interview Dr West spoke to him about his recent trip to Arizona. There he met with leaders in the Chicano & Mexicano community who have been on the front lines fighting the Draconian Law racial profiling, anti-immigrant law SB 1070.

During our convo we spoke about the oppression facing Black & Brown communities and how some have tried to hijack the legacy of the Civil Rights Movement. He noted that some have erroneously asserted the Civil Rights movement was only for Black people when in fact it was a movement for justice that included all oppressed people.

We continue our interview w/ Professor Cornel West who goes in on President Obama and his lack of policies toward poor people… Cornel talks about the public spat they had where Obama stepped to him and let him know he didn’t like what he said about him in a Playboy magazine interview..

According to Cornel, Obama was upset that he was being criticized for not being progressive. West felt Obama was out-of-order and wish the two could sit down and discuss the matter behind closed doors.

Cornel talks about the state of poverty in this country and why he’s been critical of Obama who he feels has been too cozy with corporate interests. He says he will not silence himself for Obama and that too many leaders bow down after getting a phone call from the White House.

We ask Cornel if folks should vote in the mid-term elections and whether or not Democrats have been too passive. He gives some keen insight as to how we should see the election and deal with groups like the Tea Party

We continue our interview w/ Professor Cornel West.. Here Cornel goes in on the Black church and how its been severely compromised. He also talks about the controversy surrounding Bishop Eddie Long.. Here he explains the difference between Prophetic and liberation theologies and the current wave of Prosperity Gospel teachings. He talks to us about what we as Christians and members of a Black Church should ideally be doing during these times.

Professor West  also talks about the new album he’s been working on with funk legend Bootsy Collins.. He says he’s taking it to the next level..

Below is a link to the full podcast where you can also hear the dope songs Cornel has on his last two albums “Sketches of My Culture”, “Never Forget: A Journey of Revelations”. The songs feature everyone from KRS-One to Andre 3000 to M-1 of Dead Prez to name a few.

Here’s the link to the Full Interview…