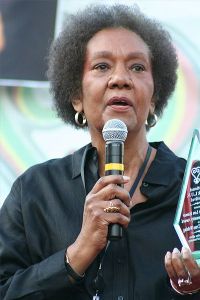 Wanna know why we have this intense racially charged reaction to President Barack Obama being in the White House?  It’s not because people may disagree with his policies. That’s understandable and fair game, but when you have a 400% increase in threats and this over the top maligning of his character mired in racial stereotypes, there’s something else going on. Perhaps we can find some answers rooted in what psychologist Francis Cress Welsing talks about in with her Race and Color Confrontation Theory.

Cress Welsing states white supremacy is a system is practiced by the global white minority, on both conscious and unconscious levels, to ensure their genetic survival by any means necessary. According to Cress Welsing, this system attacks people of color, particularly people of African descent, in the nine major areas of people’s activity: economics, education, entertainment, labor, law, politics, religion, sex and war. Cress Welsing believes that it is imperative that people of color, especially people of African descent, understand how the system of white supremacy works in order to dismantle it and bring true justice to planet Earth.

Below are clips from an appearance that Welsing made on the film Donahue show where she breaks all this down.. You can read her works in the Isis Papers and The Keys to the Colors..

This is one of my favorite videos for 2010.. Props to Oakland rapper Mistah FAB for spitting truth to power and putting this out. We need more videos and songs that speak to the conditions of the masses

I love this video from Bay Area rapper Paris featuring T-Kash. I don’t think it got the shine it truly deserves and yet it really captures and energy that was and still is here in the Bay.  Don’t Stop the Movement is energetic  and sadly fortlls the riots that broke out in the streets of Oakland around the killing of Oscar Grant

Invincible has been on fire with her videos and her songs.. Here she teams up with Waajeed to capture grittiness of Detroit. This cut Detroit Summer is on point. I like how she captures footage from the recent US Social Forum that was held there. Give this sista deserves our support and props.

This is a classic throwback that I almost forgot about.. Chuck D and Public Enemy cover a lot of ground in this video.. It ranges from Clarence Thomas confirmation to the Supreme Court to Mike Tyson being sentenced to prison to the riots at Virginia Beach during Spring Break and the riots and in South Central LA after the Rodney King verdict

The discussion around leadership especially in the Black community is an on going one that will continuously be revisited. For some its old news that needs to be avoided. With so much going on in our lives why have a discussion about leadership where one may wind up stressed out and left with lots of questions. For many others, as activist/ author  and Congressional candidate Kevin Powell points out such discussions are necessary if for any reason to keep people accountable.

The community needs to be accountable to those who speak and does things in their names. It’s understandable, when one looks at how messy politics can be.. but to not be political is political and far too often with dire consequences. Hence a community must constantly challenge, hold up high, push and agitate.

In our interview with Kevin Powell builds off many of the points he lays out in an upcoming article to be featured in Ebony Magazine. He gives an incredible and insightful breakdown of of what leadership should ideally look like in the Obama Era. He notes its not enough to simply have a few people who look like us in high places. It’s important to have a plan of action to help put into place the things people truly need.

In our interview Powell goes into great detail explaining the challenges our generation has of being lured by the ‘cult of personality’ and media punditry and how we must align ourselves with those who do the work in terms of organizing.He talks about the importance of bridging generational, class and gender divides. He talks about how we should build coalitions with others. He also talks about how we should look to make room for others to emerge. We also talk about Kevin’s run for Congress and the recent lawsuit that was launched against him by his opponent which was dismissed and seemed designed to be a distraction and a money drain versus being something of any real substance.

Like I said a lot of ground gets covered.. too much to write..