Today the Oscar Grant trial kicks off in Los Angeles with a whole lot of drama surrounding the proceedings. The most glaring is police officers rallying to invoke the Policeman’s Bill of Rights which essentially allow officers on trial to not have their history brought up while the accused or in this case victims will have their entire history along with the history of friends and family brought up and dragged through the mud.

The judge overseeing this trial is Robert Perry who came under fire for allowing corrupt cops to walk during the infamous Rampart Scandal. He’s been doing everything in his power to tilt the trial in the direction of killer cop Johannes Mershele. Among one of his more egregious rulings is to put a gag order on the famed Police Brutality lawyer John Burris. If thats not enough, Mershele’s lawyer Michael Rain‘s is pushing to have Black people excluded from the jury… Yes you read that right, they are attempting to get Black people excluded from the jury. In the interview I did with Rachel last night, she didn’t mention this but called me this morning as I’m penning this to give me the update.. We will be following up on this big time.

Also the defense gets to have an expert ‘film’ witness who is claiming the videos we all saw where Grant got shot by Mershele also shows Grant trying to punch the cop. Yes, they are claiming Grant tried to hit the cop while on the ground being restrained. Here’s the latest on the ruling to allow expert video witness http://bit.ly/cGmZU1 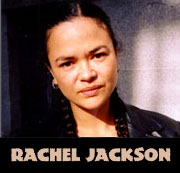 Rachel also gave us a break down of Mershelee’s history. Apparently he was known to run around and brandish his taser at inappropriate times and sadly just weeks before he killed Oscar Grant he had beat down 41-year-old Kenneth Carrethers who is an engineer who was overheard complaining about the how ineffective BART police were when it came to preventing crimes.

According to reports Mershelee overheard the comments and confronted Carrethers. The end result was Carrethers being severely beaten, hog-tied and driven to 3 different hospitals as the out of control Mershelee attempted to find a place that would cover up his brutality.

Carrethers was charged with resisting arrest but those charges were dropped not too long after Grant was killed. Here’s Rachel Jackson explaining the details behind this case.

On the eve of the Oscar Grant trial which will be held in Los Angeles, Minister Keith Muhammad explains to an Oakland crowd the Policeman’s Bill of Rights and how it will impact the upcoming trial against former BART cop Johannes Mehserle…

He also talks about the steps organizers took to make history by bringing a police officer to trial for shooting a citizen. It’s the first time this has ever happened in California. He pointed out there have been more than 8000 citizens killed by police in the past 20 years and not one conviction for wrongful death..

Also on the  of the Oscar Grant Trial we heard this sista from BAMN (By Any Means Necessary) who’s name is Yvette Falarca. Here she lays down all the obstacles organizers overcame to get to this point in history where a killer cop (Johannes Mehserle) has been brought to trial. This is a first in California history..

She also talks about the evidence that will NOT be allowed in the upcoming trial which includes Mershelees past brutality incidents..

We are also reminded that that it is up to us to make sure that everyone involved is aware that injustice will not be accepted in the city of Oakland…All the stops are being pulled out to set up this trial to fail. It ranges from gag orders placed on certain organizers and spokespeople like Attorney John Burris on down to additional provisions from the policeman’s Bill of Rights being enforced.

8 comments on “Oscar Grant Trial Kicks Off-Killer Cop Had History of Violence, Community Speaks Out About Judge’s Bias Toward Police..”