Like everyone I’m watching this Gulf Oil Spill and seeing all the dead oil slicked animals and hearing endless pronouncements about how BP is going to try one failed method after another to cap the leak. Of course nothing is working, everyone is pointing fingers and at the end of the day, I see more political posturing than I do genuine concern for the destruction of the environment and the Gulf Coast Economy.

Nowadays everyone seems to be pointing a finger at President Obama, accusing him of being too cool, too relaxed and not moving fast enough. I agree Obama needs to be putting the smash on BP in a big way even if they have given him lots of money in the past.  After all, this is bigger than one’s relationship with campaign contributors. At the same time I hear a deafening silence from the wing nuts who showed up in New Orleans a little more than a month ago talking all that ‘Drill Baby Drill‘ nonsense. For those who don’t remember take a look at this… http://www.srlc2010.com/

That was the Southern Republican Leadership Conference where you had all sorts of folks not only championing off shore drilling, you also had folks talking about how we needed less government and how Obama was right up there next to ‘socialism‘ as if that’s really a bad thing. Of course now that we have this catastrophe we have many of those same people including Louisiana Governor Bobby Jindal damn near crying on TV demanding the government step up and do something. He needs to be smacked upside the head and told made to take his words back that Drill Baby Drill mantra. I haven’t forgotten while serving Congress Jindal was riding hard for H.R. 4761: Deep Ocean Energy Resources Act of 2006 which would’ve lifted the moratorium on off shore drilling. The bill never passed, but Jindal was a still a rider along with just about every other Gulf Coast State governor. I wonder if they’d be pushing for those off shore drillings now?

Big shout out to Talib Kweli and Public Enemy for stepping up and dropping songs dealing with the immigration bill in Arizona. Talib has a new song called ‘Paper’s Please‘ and Public Enemy and DJ Johnny Juice who had already released a song addressing the issue remixed it.  ‘Tear Down That Wall’-(Aztlan remix) .They join other artists who released songs like Swindoe-(Roadrunner vs the Coyote), Toki Wright- (By the Time I Get to Arizona 2010) and a coalition of Arizona artists who dropped the song ‘Back to Arizona Rappers Against SB 1070‘ .

Its good to see artists stepping up and using their talents to address these important issues. We had a slew of artists ranging from Jasiri X to Beeda Weeda, Mistah FAB & Jennifer Johns and Zion I aka the Burnerz who all came with songs after  an unarmed Oscar Grant was murdered by a BART police officer in Oakland.

Prior to that we had everyone from David Banner and DJ Shadow to Juvenile to Jay-Z step up to address issues around Hurricane Katrina. It’s just a matter of time before we start hearing songs around the killing of 7 year Aiyana Stanley Jones.

Here are some stories to peep.. 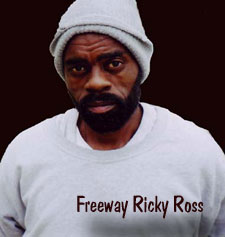 , which were allegedly ignored.

Sources told AllHipHop.com that Ross’ lawsuit will claim that the rapper stole his identity and based it on Rick Ross’ real drug dealer image in the black community.

According to sources, Ross is planning to sue Def Jam, Universal, William “Rick Ross” Roberts II and others.

Last week, Arizona University’s professor of Latina studies Professor Sandra Soto took the stage to address 2010 graduates of the school’s Social and Behavioral Sciences program. Naturally, her words were timely and touched upon the state’s recently passed immigration laws that allow police to question and detain anyone who they suspect of being an illegal immigrant.

Then, she called the measure “the strictest anti-immigrant legislation in the country” that is “explicitly intended to drive undocumented immigrants out of the state.”

Her summary, while quite accurate, elicited a wave of boos and insults from the audience.

In a video of her speech published to YouTube, either the camera man or someone close by seems amused at her characterization.

“…to a whole lot of people, myself included, it appears to not only invite but require the police to engage in racial profiling,” she continued, eliciting another wave of boos.”

“Bitch!” a man near the camera shouted.

We caught up with Bambu at SxSW last year  and he spoke to us about the Filipinos in Hip Hop and gang life in LA. He noted that he doesn’t say gang life is wrong.. He says it needs to be redirected and folks need to use their talents and intelligence to really owning their blocks. http://www.youtube.com/watch?v=GYgW5h95wuw

Wall Street Reform Turns Out Great for Wall Street — Why Aren’t the Big Banks Being Punished?

You would think as this 1,500 page “reform” went through (anyone want to bet if its strongest provisions will survive the reconciliation process?) the banks would be quaking in their boots. After all, they funded what President Obama called swarms of lobbyists to kill it at birth. They denounced it with doomsday language with their rhetoric helping to drive the market down. Oh, the fear! Oh, the consequences!

But then, what happened? Were bankers jumping out of windows like their predecessors did when the market crashed in ’29? No way.

Bank stocks soared on Friday, with the share price of JP Morgan Chase, one of the biggest finance houses, surging 5.9 percent and helping drive the Dow Jones Industrial Average up 125 points. Other bank stocks rose sharply: Bank of America up 4.7 percent, Goldman Sachs up 3.3 percent, Morgan Stanley, Wells Fargo and Citigroup. The S&P financial sector index was up 3.6 percent overall.