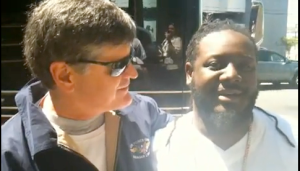 There’s a lot of hoopla about T-Pain hooking up with Fox News icon Sean Hannity and him endorsing the Republicans.. Below are a couple of videos. One shows how Hannity and T-Pain hooked up.. The other one shows whats been going around on YouTube.. Personally I don’t think its a big deal.. There have been and will continue to be conservative folks in Hip Hop  as well as artists who back causes pushed by conservatives..

For starters.. a few years ago LL Cool J endorsed GOP Governor Pataki over Carl McCall who was running and would’ve been NY’s first African American governor.. I did an interview with MC Serch and Pete Nice of 3rd Bass at the Source Awards back in 99 or 2000 and they both said they were Republicans.. Bill Stepheney co-founder of Public Enemy I believe is Republican and if you recall Canibus came out and supported George Bush‘s call to war. In fact he did a song called Draft Me and then went off and served in the army..Not sure about Pitbull, but he’s definitely not supporting anyone (mostly non-conservatives) who are down to open up talks with Cuba. His stance against Cube prompted Mos Def to write an open letter challenging him..I was just reminded about Daddy Yankee showing up to the 2008 GOP Convention to support John McCain.. He said he was down to roll with him because he was against illegal immigration.. His remarks drew the ire of Fat Joe who publicly chastized him..

On a side note we can’t forget that in 2004, Jay-Z opened up his 40/40 Club to the GOP where RNC head Michael Steele held a big party and was bragging about how the GOP was connecting to Hip Hop the next day.. Jigga wasn’t there, but they sure did try to make the connection big time..

Peep the videos with T-Pain and you decide..Personally I think Hannity was having fun knowing that him standing nxt to T-Pain would cause everyone to talk.. I think Pain didn’t really care.. he wasn’t tripping like that.. Its publicity for both

Someone just hit me up with a commentary from J-Smooth of Ill Doctrine.. here’s his take on this..