Waterproof, Louisiana, and the region around it may be majority Black, but White Power is determined to prevail by any means necessary. White parish officials replaced the town’s African American mayor and arrested the Black police chief for kidnapping when he placed a lawbreaker under arrest. “They are determined to let you know you have a place and if you don’t jump when they say jump you are in trouble.”

As you read this story you can listen to the interview we did yesterday with investigative reporter Jordan Flaherty and Chief Miles Jenkins.. Its unbelieveable that such things are still going on in 2010 Here’s the link our Hard Knock Radio podcast   http://www.swift.fm/mrdaveyd/song/33537/

Shout out to Black Agenda Report who first ran this piece..

Did a Racist Coup in a Northern Louisiana Town Overthrow its Black Mayor and Police Chief?
by Jordan Flaherty
http://www.blackagendareport.com/?q=content/did-racist-coup-northern-louisiana-town-overthrow-its-black-mayor-and-police-chief
“We hope the justice department will look into this and bring some much-needed reform to this part of the world.” 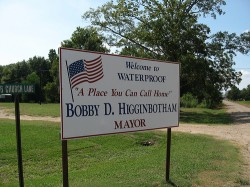 Bobby Higginbotham was elected mayor of Waterproof in September of 2006. The next year, he appointed Miles Jenkins as chief of police. Jenkins, who served in the US military for 30 years and earned a master’s degree in public administration from Troy University in Alabama, immediately began the work of professionalizing a small town police department that had previously been mostly inactive. “You called the Waterproof police for help before,” says Chief Jenkins, “he would say, wait ‘til tomorrow, it’s too hot to come out today.” He also sought to reform the town’s financial practices, which Chief Jenkins says were in disorder and consumed by debt.

Chief Jenkins asserts that a white political infrastructure, led by the Parish Sheriff Ricky Jones and District Attorney James Paxton, were threatened by their actions. This group immediately sought to orchestrate a coup against the two Black men, including clandestine meetings, false arrests, harassment, and even physical violence. Court documents describe how Paxton, Jones, and their allies formed an alliance “designed to harass intimidate, arrest, imprison, prosecute, illegally remove plaintiff from his position of police chief, prevent plaintiff from performing his law duties as police chief and/or force plaintiff to leave the town of Waterproof.”
“If you’re educated and intelligent and know your rights and in this parish, you are in trouble.”
Ms. Annie Watson, a Black school board member in her 60s who was born and raised in Waterproof, worked as a volunteer for the mayor. She says that the mayor and chief, who had both lived in New Orleans, brought a new attitude that Parish officials didn’t like. “The Mayor and the Chief said you can’t treat people this way, and the Sheriff and DA said you got to know your place. If you’re educated and intelligent and know your rights and in this parish, you are in trouble,” she says. “They are determined to let you know you have a place and if you don’t jump when they say jump you are in trouble.”
Ms. Watson explains that Paxton and Jones were threatened by Chief Jenkins’ efforts to professionalize the town’s police force. Aside from representing a challenge to Sheriff Jones’ political power, this also took away a source of his funding. “Before Mayor Higginbotham, all traffic tickets went to St. Joseph,” she says, referring to the Parish seat, where Sheriff Jones is based. “So he cut their income by having a police department.”
Jack McMillan, an African American deputy sheriff in Tensas Parish, says he tried to warn Chief Jenkins to back down. “You’ve got to adapt to your environment,” he says. “You can’t come to a small town and do things the same way you might in a big city. Like the song says, you got to know when to hold ‘em, and know when to fold ‘em.”
Tensas Parish

Tensas and the nearby parishes of Madison and East Carroll all share the sixth judicial district – currently represented by District Attorney James Paxton. Buddy Caldwell, DA for the sixth judicial district from 1979 to 2008, is now Attorney General for the state of Louisiana. The sixth district parishes all have majority Black populations and mostly white elected officials, which Chief Jenkins and Watson attribute to political corruption and disenfranchisement of Black voters. Prior to the registration of 15 voters in 1964, there was not a single Black voter registered in Tensas, despite having more than 7,000 African American residents (and about 4,000 white residents), making it the last Parish in Louisiana to allow African Americans to register. 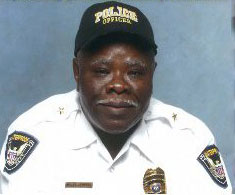 Chief Jenkins says he faced an immediate campaign of harassment from Sheriff Jones. “They just wanted this town to be white-controlled,” explained Chief Jenkins. The police chief described being arrested multiple times under the order of District Attorney Paxton and Sheriff Jones. The charges, says Jenkins, range from charges of theft for a pay raise he received from the town’s board of Aldermen to criminal trespass for going to the home of a citizen who had been stopped for speeding without a valid driver’s license, to disturbing the peace for an incident where individuals threatened the police chief with violence for issuing traffic citations. Ms. Watson says the charges were invented out of thin air. “It was a sad case of lies,” she says, adding that, “The majority of the town of Waterproof supports the chief and supports the mayor.”

Mayor Gerald Washington was killed shortly after being elected

Mayor Higginbotham was elected at the same time as two other Black mayors of small Louisiana towns, both of whom also received threats based on race. In December of 2006, shortly after Higginbotham was elected mayor of Waterproof, Gerald Washington was shot and killed three days before he was to become the first Black mayor of the small southwest Louisiana town of Westlake. An official investigation called his death a suicide, but family members call it an assassination. Less than two weeks after that, shots were fired into the house of Earnest Lampkins, the first Black mayor of the northwest Louisiana town of Greenwood. Lampkins reported that he continued to receive threats throughout his term, including a “for sale” sign that someone planted outside his house.

Waterproof was Klan country from the Reconstruction era until well into the 20th century, and violence frequently broke out in the area. Seven Black men in Madison Parish were lynched over a period of three days in 1894 for the charge of “insurrection,” apparently because one man refused to follow an order from a sheriff. “The Klan was very active here,” says Ms. Watson, recalling her childhood in the 50s and 60s. “We had crosses burned on people’s lawns. The school principal had a cross burned on his lawn. A man named Sun Turner was shot and killed on the streets by the Klan.” Waterproof is an hour south of Tallulah, the site of a notoriously abusive youth prison, and a little more than hour east of Jena, where accusations of systemic racism brought 40,000 people from around the country, including many civil rights leaders, to a 2007 march. Like Jena, Waterproof is also home to a prison that contracts to hold federal immigration prisoners.
“Gerald Washington was shot and killed three days before he was to become the first Black mayor of the small southwest Louisiana town of Westlake.”

When asked for comment on Chief Jenkins’ lawsuit, Tensas Parish Sheriff Ricky Jones denied that race was a factor, claiming that Jenkins had abused his office and that many of the local citizens who filed complaints against him were Black. “I’m not going to support any type of corruption,” said Jones. “Certainly not from him.” District Attorney Paxton, also named as a defendant in the lawsuit, disputed all accusations from Jenkins, suggesting that he had tried to help Jenkins when he was first elected. “A lot of this will become clear when the case against Mayor Higginbotham goes to trial on Monday,” he added.

Flood Caldwell, one of the town’s aldermen, is currently serving as the town’s mayor. Jenkins points to Caldwell’s appointment as further evidence of a coup, saying that the town aldermen, under the direction of DA Paxton, illegally voted to remove Mayor Higginbotham. “No one recognizes Caldwell as mayor except the DA and his friends,” says Chief Jenkins. The office of the Louisiana Secretary of State confirms that they still have Higginbotham listed as mayor, adding that they cannot comment further because of pending litigation.
Wilson says this case is ultimately about the repression of Black political and civil rights. “I think this has been going on in Tensas for a while,” he says. “I think they’ve gone too far in this case, and someone finally has come along and says they won’t go along.” Wilson hopes this lawsuit will bring federal attention. “We hope the justice department will look into this and bring some much-needed reform to this part of the world,” he says.
Chief Jenkins says he took the Sheriff’s job to serve the community, “You’ve given this country the best years of your life and you get treated like an unwanted stepchild,” he says. “I didn’t realize there was so much politics to just doing your job.”
Ms. Watson believes that this is a struggle for self-determination and basic civil rights. “I was born in 1948,” she says. “Ever since I was born, Blacks never had a say in this parish, until Chief Jenkins and Mayor Higginbotham. They spoke up, and tried to change things. That’s why the parish is going after them.”
Jacques Morial of the Louisiana Justice Institute contributed to this story.
Jordan Flaherty is a journalist, an editor of Left Turn Magazine, and a staffer with the Louisiana Justice Institute. He was the first writer to bring the story of the Jena Six to a national audience and audiences around the world have seen the television reports he’s produced for Al-Jazeera, TeleSur, Press-TV, GritTV, and Democracy Now, as well as his appearances on Anderson Cooper 360, CNN Headline News, and several other programs. His post-Katrina reporting for ColorLines shared an award from New America Media for best Katrina-related reporting in ethnic press. Haymarket Press will release his new book, FLOODLINES: Community and Resistance from Katrina to the Jena Six, in 2010. He can be reached at neworleans@leftturn.org.
Return to Davey D’s Hip Hop Corner