Looks like 2010 may be the year of the Hip Hop club.. What am I talking about. Since the beginning of this year we’ve had two documentaries with a third on the way as well as book highlighting the legacy of three landmark nightclubs that helped shape and introduce Hip Hop music and culture to the masses.

The first club that’s been highlighted is The Fever.  Long time writer Mark Skillz, penned an article about this pioneering hot spot in the Bronx. The article which first appeared in Wax Poetics Magazine was called ‘ When The Fever Was Mecca-The Legacy of Disco Fever ‘.  In this piece Skillz focuses on the club’s deejay Junebug who was also a drug dealer. The story was so compelling that it was made into a documentary which premiered the other week at SxSW.. It won a special Jury Award and is expected to be featured in the Tribeca Film Festival.  The Film is called White Lines and The Fever: The Death of DJ Junebug:

The story of Junebug‘s double-life as a DJ and drug dealer. Recalling the Bronx in the early 1980’s, this documentary explores the old-school days of hip-hop and the dangerous underworld at the legendary Disco Fever. Never-before-seen footage and interviews with Kurtis Blow, DJ Hollywood and Sal Abbatiello tell the tragic story of one of the greatest DJ’s ever. Based on Mark Skillz‘ “When The Fever Was The Mecca,” published in Wax Poetics. 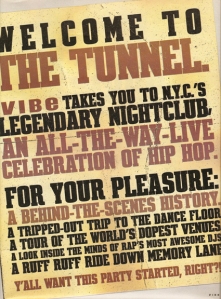 The other legendary Hip Hop night spot that has a documentary surrounding it is The Tunnel which was the destination spot in NY 1994-2001 and held down by DJ Funkmaster Flex.

Flex, Choke No Joke and Streetfunk TV presents the Tunnel Documentary. The Tunnel Nightclub was a club in NYC that was open from 1994-2001. Streetfunk TV and Choke No Joke recorded the biggest names in Hip Hop every Sunday at the club most people feared to enter. Funkmaster Flex was the promoter for this weekly event that went on for seven years. Some of the biggest names in Hip Hop performed here from Jay-Z, Dr. Dre, Snoop Doggy Dogg, Puff Daddy, Ma$e, Nas, Method Man, Redman, Capone and Noreaga, Shyne, Jermaine Dupri, Da Brat and many more…. 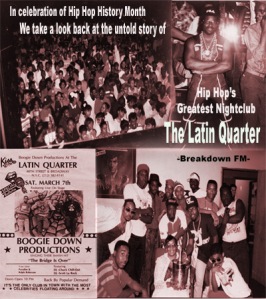 The other landmark spot getting alot of attention is the Latin Quarters which had at its helm Paradise Gray of X-Clan who booked many of the acts and had DJ Red Alert and Chuck Chillout rocking the tables.  The spot flourished in the 80s and like the Tunnel which came after it, was a destination spot for Hip Hop lovers all over the world.  It was the spot that launched all sorts of careers from 3rd Bass to KRS to the Jungle Brothers to Schoolly D etc.. Long time Italian Hip Hop scribe Giuseppe Pipitone has teamed up with Paradise and are putting the finishing touches on a book which focuses on the Golden Era of Hip Hop and starts off by talking about the 1987 meeting called by Afrika Bambaataa to encourage the popular artist of the day to become more socially conscious and use their talents for greater good. It was at that meeting that KRS-One was inspired to launch his Stop the Violence Movement. A number of other meetings followed resulting in a strategy to get people to stop wearing Gold chains, replacing them with African medallions. It’s an incredible piece and when I spoke to Paradise he noted that they are lining up dates for a tour.

Of course we be wrong  if we didn’t shout out the excellent documentary ‘This is the Life’ which came out a couple of years ago and chronicled what was going down in South Central LA at the Good Life Cafe during the early 90s.. This was the place that everyone from Jurassic 5 to Medusa to  Freestyle Fellowship to Abstract Rude came and launched their careers.

As we start to look at the stories behind some of these landmark destination places in Hip Hop, others will come to life. I’m thinking places like Silks in oakland, Radio in LA, the Rooftop in New York, The T-Connection in the Bronx..The Upper Room in San Francisco  The list is long.. I’m glad the stories behind these 4 places are being told.