When it comes to Hip Hop every city has its own pioneers and their own unique special history.. Some of it was influenced by what was going on in New York, a lot of it was homegrown and came to light once things started to bubble up from NY in the early 80s.. In other words, in places like LA and the Bay Area there was already a thriving street dance scene where people were tutting, popping and roboting which had nothing to do with New York..  Funk and later Uptempo dance records  were the gems that galvanized people..

Below are some of the first records I recall hearing out of LA back in the early days of LA rap, which I should add was different from the Bay which has its own unique history.. What I liked about LA’s history was many of the artists started off as DJs..  People like Arabian Prince, DJ Unknown, Egyptian Lover, Chris The Glove Taylor, Tony G, Joe Cooley , Julio G, Uncle Jamms Army etc..

In the video below you see Chris the Glove who produced the cut Wreckless and featured Ice T is shown in this 1983 video along with Egyptian Lover demonstrating deejaying..

A lot of the music in LA’s early Hip Hop days was classified as electrofunk and is often associated with the sound Afrika Bambaataa established with his song Planet Rock. However, when speaking with the eraly DJs from LA, they say they were already into that sound way before hearing Planet Rock. Egyptian Lover explained that he was influenced by early Prince and Kraftwerk.. and that he had been deejaying in a crew since the mid 70s.. Folks in LA will recall how Egypt who was part of Uncle Jamms Army used to do huge parties at the LA Coliseum where they would work 4 turn tables at a time which was pretty major back at that time..

Other pioneering figures  had already been playing in bands and were producers.. Rich Cason is a one such pioneer. You can’t talk about LA Hip Hop without proppin him up.. He’s a key foundation… The first records I heard from LA that I associated with Hip Hop was Killer Groove by Formula V, Gigiolo Rapp and Bad Times by Captain Rapp were all produced by Cason. His legacy goes way back to the  60s. In fact his group Formula V had been putting out records since 1973. 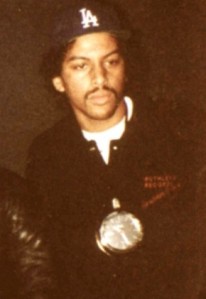 Arabian Prince who was an original member of NWA is another pioneering figure in LA Hip Hop who was deejaying in a crew since the 70s.  He started out as a DJ and later went on to produce. He’s unique in the sense that he was a pioneering figure in Hip Hop’s electro-funk movement as well as pioneering figure in Hip Hop’s gangsta rap movement. A quick look at his track record will show you that he produced landmark tracks for everyone ranging from JJ Fad to Bobby Jimmy and the Critters as well as NWA.  Here’s an interview he did with him. http://odeo.com/episodes/25600777-Interview-w-Original-NWA-Arabian-Prince

Tons of things have been written about the World Class Wrecking Crew which was home to Dr Dre… They had a bunch of hit songs and Dre helped elevate the deejay game before he went on to start producing..

Here are some other early cuts I recall from back in the days..Now please keep in mind this is just a taste of a city that is steeped with stories.. No, we haven’t touched on the dance scene and influence. We haven’t talked about KDAY and the Mixmasters which go back to ’83 and 84.. We haven’t touched on the Good Life or any of that..  This is just a sample.. A great place to go to get some good info on early west coast is my folks from germany who run www.westcoastpioneers.com

21 comments on “BlackHistoryFacts: Every Place Has a Story to Tell-Early LA Hip Hop”