As many of y’all know popular Atlanta rapper Gucci Mane was sentenced to 12 months for parole violation. It comes on the eve of his highly anticipated album being released. His arrest and him testing positive for drugs has left many wondering, how and why someone who has so much going for him and has apparently overcome alot would get caught up and be dragged back into the prison system.

Over the past few months Gucci Mane has emerged as an important voice for a generation as he’s been prominently featured on everything ranging from the BET Awards and in videos and songs with the Black Eyed Peas, Usher, 50 cent and Maria Carey to name a few. Its been reported that he’s been able to command 64k a show and has been able to get that 4 nights a week.

While Gucci Mane has been dealing with all this, whats been surfacing or resurfacing depending on how long you been follwing Gucci Mane is a video of him punching out a sister. From what I gather the tape popped up earlier this year and it shows an annoyed Gucci punching out his former rhyme partner and according to reports, former lover Mac Breezy who is featured on his debut album “Go Head”. Its pretty disturbing and later shows Mac Breezy trying to shrug it off like it was no big thing..

For some this will not come as a surprise because of Gucci’s persona and rough and rugged reputation, but  for many others its new and raises alot of  question including, how was this issue resolved  and if it wasn’t what’s the justification for all the mainstream promotion?  For example, BET gave Gucci lots of love during their recent Hip Hop Award show. He was featured in 4 performances.  It was just a few months ago that came under fire  when they featured Lil Wayne and Drake doing what many considered an inappropriate raunchy adult themed song while trotting young girls who looked like they were no older than 12 or 13 across the stage. BET back pedaled and removed the performance in later showings.

But after all the anger that was expressed, they gave prominent performance spots to Gucci Mane. How have outlets who have promoted and are riding hard for him reconciled this? Does it need to be reconciled?

I ask this because when Gucci Mane performed on the BET Awards, he was featured in a Public Service Announcement talking about how its wrong to do drugs… Perhaps he should’ve been doing one that says ‘It’s wrong to hit women’… maybe that might be the more appropriate response at a day and time where we had a gang rape of a 15-year-old girl while people stood around, watched, cheered took pictures and did not call authorities for 2 and half hours.

This comes at a time when just yesterday it was reported that a young Bay Area woman and her infant were killed by an ex boyfriend was just let out of jail for the murder of another child 15 years earlier..

This is not to say Gucci Mane doesn’t deserve second chances or people can’t redeem themselves etc, but when you see so many artists doing the hard work of addressing and trying to eradicate these pressing issues, can’t get any love whatsoever, not even a mention one many of these outlets, one has to wonder why the constant love and upliftment of folks who did wrong and in Gucci’s case since he violated parole and has been sentenced to a year in jail, continue to do wrong.. 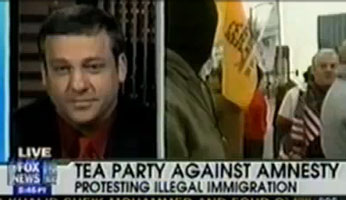 Last week we reported how the Tea Party folks were gonna be organizing Anti-Immigrant rallies in 50 cities around the country. The rhetoric being used was pretty inflammatory and it was noted that people should be aware of  attacks…

Quite naturally there were counterprotests, but what was interesting is to see how the Tea Baggers have been aggressive in confronting counterprotests… This video spells it out, although the Tea Party folks have tried to flip the script and say they were the ones assaulted.

What needs to be noted is in most marches unless you are press you stay on your side of the street or in the area designated for your protest.  In almost every demonstration I’ve been to including the weekly ones that occur during our local farmer market each Saturday where Pro-Palestinian and Pro-Isreal folks hold simultaneous vigils and rallies.. They stay on opposite sides of the street and as instructed and later enforced by local police, one doesn’t roll off to the other side and start filming, holding up signs etc.. To do so is considered an antagonistic act.

When you view the video which was put out by the Tea Party people, you see what was clearly an act of provocation. This is just the beginning folks. Things are about to get ugly.

Update: someone sent me a copy of the anti-immigrant rally in Minneapolis.. Here these racist Tea Party folks get seriously punked.. pay close attention to the speaker at this ‘sparsely’ attended rally which was said to be ‘well attended’.. The speaker talks about the bigger problem of illegal immigrants..

Losing Andrea is very shocking indeed, she was a cool sista, a valued colleague and a bright spirit. Sadly for us at KPFA, she is the second person we lost in the past couple of month… We lost longtime producer and  community activist icon Gina Hotto. many of us are still dealing with that loss… The fact that both women died of heart attacks at relatively young ages is even more disturbing..  They will be missed as each of us have to struggle with really understanding that no one is promised tomorrow and that we all have to pay close attention to our health…

The progressive movement in America has lost a beautiful voice.
Andrea Lewis, radio host at KPFA and a contributing writer for The Progressive magazine and Progressive Media Project, died this weekend of a massive heart attack. She was only 52.

She could write quickly and well on a whole range of subjects, but she was especially interested in combating racism, sexism, and homophobia. The last Progressive Media Project piece she wrote was about Billie Jean King receiving the Presidential Medal of Freedom.

“King’s most memorable battles were not fought on the tennis court,” she wrote. “She lived as an out lesbian before it was remotely fashionable to do so. She fought for equal pay for women athletes, and by extension, women in general.” (For a compendium of her Progressive Media Project columns, click here.)

Those adjectives apply to Andrea, as well.

I last saw Andrea this May when she helped co-host The Progressive’s 100th anniversary celebration in Madison, Wis.She did so with her usual aplomb (and for no money, I might add).

She and I would do tag-team introductions, and her impromptu intro for Dolores Huerta was especially moving.

During the conference, she also participated on a panel entitled “Defending Civil Rights for All.” She talked about the various oppressions she’d had to deal with her whole life: being black, being female, being a lesbian, being a woman of size, and becoming disabled. She stressed how important it was for all of us to call out bigotry of every stripe—and not to let it slide.

She reiterated that point in the last thing she wrote for The Progressive: her picks for “Favorite Books of 2009.” One book that she chose was Time Wise’s “Between Barack and a Hard Place: Racism and White Denial in the Age of Obama.”

“Wise’s analysis is centered on, but not limited to, black/white race relations in the United States,” she wrote. “Ultimately, however, his message is to whites, whom he challenges to speak out against racism wherever and whenever it occurs.”

She was proud of what she’d achieved in journalism, including being selected as a member of the Stanford University Knight Journalism Fellowship Class of 2008. And she was proud to have a quotation from her 2005 interview with Barbara Lee included in The Progressive’s 100th anniversary edition in April. The quote was: “Congress gave the President a blank check to wage an undefined war against an undefined enemy for an undefined period of time. We shouldn’t have given him that authority.” (To read that interview in its entirety, click here.)

Andrea Lewis was a woman with many talents. She sang in a S.F. choir, she knew music backwards and forwards, she read widely, she was a lifelong golfer, and she was an avid sports fan.

But beyond her accomplishments, she was just a lovely woman.

I will miss her passion for justice.

I will miss her fluid voice.

I will miss her belly laugh.

And I’ll miss the human touch of her notes.

In one of her last e-mails to me, knowing I’m a Shaquille O’Neal fan, she wrote a P.S. that said: “Shaq and LeBron. What do you think? Will this be Cleveland’s year?”

Now I won’t be able to kibitz with her about small things like that or large things like Obama anymore.

None of us will.