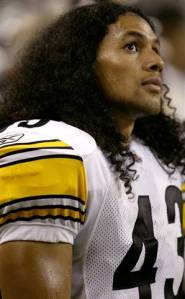 Major props have to go out to Troy Polamalu.. As Paradise of X-Clan pointed out this all pro Pittsburgh Steeler personifies the type of off the field behavior for all athletes to follow. This brother stands firm for a number of causes. Most notable is the behind the scenes work he does with the homeless.

Many people don’t know, but Polamalu is well known amongst Pittsburgh’s homeless because he shows up to freeway underpasses and other spots where homeless people live and he brings them food, clothing. He buys them groceries and looks out for folks. It’s a thing that many in the media knew little about-which is a testament to Polamalu because he wasn’t trying to be some media hero.

It was during the G20 summit when the homeless were being forcibly moved that Paradise Gray and Jasiri X ran into Polamalu who was visibly upset when he learned how the homeless was being treated. He was doing all that he could do to help them out..

Hence Polamalu helping out his people in a devastated Somoa should be of no surprise. This is what he does and because of his heroism we salute him and hold him up as a shining example for all to follow..

Gorman: Polamalu pauses for Samoan cause

Troy Polamalu has developed a cult following here and throughout the NFL for his long, curly locks and Tasmanian Devil-style of play. It shouldn’t have taken a natural disaster in his homeland for us to ask about Polamalu’s bond with his Samoan heritage.

Not until the 8.0-magnitude earthquake and three ensuing tsunami tidal waves that killed 168 people in the South Pacific this past week did we bother to explore the background of the superstar safety, already one of the Steelers’ all-time greats. For once, we should not worry about the status of his injured left knee and treat Polamalu as a person instead of a cartoon hero.

Polamalu was born in California and raised in Oregon, but comes from American Samoa descent and a traditional Samoan upbringing. He speaks softly, but Polamalu wants the world to know he’s willing to raise his voice and lend his name to a cause close to both his heart and heritage.

“It’s different in the sense that, we had a tragedy here with Hurricane Katrina, but this is islands in the South Pacific. It’s not as Westernized. Help is not immediate. In that case, it’s scary,” Polamalu said. “I don’t know how outspoken you can be and be heard, and who would really care. It depends. We’re not dealing with Texas or Louisiana. We’re dealing with American Samoa, which is a protected territory of the United States. I mean, western Samoa, America couldn’t care less about — but I would probably say the majority of the (Polynesian) NFL players are from there.”

Six NFL defensive linemen are from American Samoa (pop. 66,000) alone, but there are 30-plus NFL players with family ties to the South Pacific. The Steelers have two in left guard Chris Kemoeatu, a Tongan raised in Hawaii, and Polamalu, who would like to see Samoa recognized as something other than a breeding ground for future NFL players.

“Honestly,” Polamalu said, “I think the NFL should get involved. Most importantly, hopefully, the United States government will get involved.”

The voice of Polynesian players past and present has already been heard. The NFL organized a conference call Friday with FEMA and the Red Cross, at the request of retirees Jack Thompson and Vai Sikahema, to keep players updated and to assess what to do charitably. It’s a sign of the impact pro athletes can have in using their influence to make a difference.

“We have to go down there and help rally the troops and rally the people,” Sikahema said, “because they so highly regard their players who come and have made a name for themselves in the NFL.”

None is regarded as highly as Polamalu, among the league’s most identifiable stars for wearing his hair long in the Samoan tradition. What’s sad is that we don’t much more about a man who is so deep spiritually and culturally. Polamalu’s family is from Ta’u, one of five volcanic islands in the American Samoa and a place he describes as one where people live in huts and off the land. The damage is more severe in developed isles like Tutuila, where capital city Pago Pago was under water.

Miami Dolphins nose tackle Paul Soliai had an aunt and uncle die in the tsunami and has other relatives unaccounted for and Cincinnati Bengals defensive end Jonathan Fanene lost some cousins, so Polamalu knows how fortunate he is that his family still living there survived.

“Thank God my family is safe, but the Samoan community is a little different in the sense that it’s really small and really family-oriented,” Polamalu said. “Even friends are considered family, and a lot of my friends and their immediate relatives have not been found yet.”

While Polamalu wasn’t born in the Samoan islands and plans to defer charitable leadership to those who were, he wants to use his platform and lend his presence as part of the Samoan concept of fa’a lavelave.

Polamalu understands the clash of cultures between the Samoan way and the Westernized world, and knows that throwing money at the disaster won’t solve the crisis. Samoans are Aboriginal, live in villages and follow a chiefly system, where livestock can be considered more valuable than money.

Under fa’a lavelave, everybody contributes.

For the love of the game and Polynesians like Polamalu who play it with such passion, it’s time we put our fa’a lavelave in and show some support.

Paradise Gray, Jasiri X and Sister Teisha visit an area on the Northside of Pittsburgh, PA, A five minute walk from the David L. Lawrence Convention Center where the G20 was held.

So you think that you live in a “Hole in the wall”?

You aint’ seen nothing yet! This is the Pittsburgh, PA that they did not want visitors at the G20 Summit to see.