by Davey D and Mark Skillz 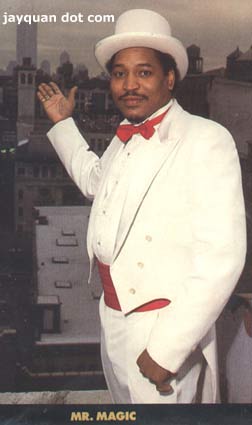 Today just getting word that one of our Hip Hop pioneers has passed. As I started writing this we’re still trying to officially confirm, but according to what DJ Premier twitted earlier Mr Magic who was best known as being among the first to have a Hip Hop show on a major radio station has passed.  Still trying to process all this, because we’ve lost so many people this year. It was just a week or so ago we were mourning the passing of DJ Roc Raida.  For us in the Bay Area we lost a longtime KPFA  radio colleague and well known activist Gina Hotta. She passed of a heart attack. What we’re hearing w/ Mr Magic he too passed of a heart attack. He was 55 years old.

If you were around in the late 70s/early 80s then you will clearly understand what Magic meant to Hip Hop. For years he was the pinnacle. When he started out on WHBI, just hearing his show was major. It was a really big deal, because what we were doing in the parks, at rec centers and in our living rooms was insulated. No one else in the world knew what was bubbling up in the Bronx.  When Magic got picked up and was added to the line up of commercial station WBLS.. It was major. One of our own had graduated and was on the big stage. Saturday night was what so many of us eagerly looked foward to…Mr Magic with his booming voice gave Hip Hop that importance. He had what they call gravitas. He made you and Hip Hop official. He was a radio announcer not a kid doing college radio. He wasn’t someone shouting into a microphone. He was our Frankie Crocker, who was the legendary DJ and at the time program director for WBLS.

Was just talking to Hip Hop historian and writer Mark Skillz  who also grew up on Magic and he noted that Magic laid the ground work for every on air personality that came from the streets and made it to radio. He was always classy even when he was arrogant and he could sure be arrogant at times.  He was older than the average listener and fan of rap at that time and could’ve easily been associated with disco or soul music. But he put everything on the line because he really believed in the music. On a couple of occasions he was fired. The most infamous occasion was when he stood up to Frankie Crockerwho as mentioned was a legend in his on right. Crocker wanted to change formats and take rap off the air. Magic stood up to him and refused to change his show and was fired resulting in him returning to his first station WHBI.  Skillz added that its important to understand that back then and even recently, people paid to have a show on WHBI. You had to raise money to have a slot on the air.

Magic was important to two different eras of Hip Hop. He was the connection to the  pioneering day also known as True School. He was the one that brought us Flash, Mele-Mel, Crash Crew, Sugar Hill, Busy Bee etc.  he later became the important gateway to the what we now know as the Golden Era. He was once dubbed Sir Juice as he was the big connection and champion for the Juice Crew. Skill z was sharing memories with Sweet Gee this morning upon hearing the news and was reminded by G that the original Juice Crew was Sal Abbatiello, Sweet Gee, DJ June Bug, Kurtis Blow and Mr Magic aka Sir Juice.Sal who owned the Fever night club brought them all diamond rings. In many ways for  long before Diddy, Jay-Z  or the Jiggy era came along, Magic and his people personified flashiness within Hip Hop. They were smooth and represented the style of the day.

Skillz was  recounting seeing Magic wearing rings on every finger and having  gold rope chains. He used to sport a shark skin suit. He was a Hip Hop version of Mr Tee. Back then that was Hip Hop at its finest for better or for worse.

When he got his Rap Attack show on WBLS he was the man. Folks old enough will recall what it meant to record a Mr Magic show. Those cassette tapes got passed all around the world. He was that dude. Interestingly enough Magic followed the important tradition long established by Black radio DJs of being our mouthpiece and Griot of sorts. In many ways he was the face of Hip Hop and our ambassador. He was our connection to the outside world, the corporate world etc. When his show came on, all of New York stopped what they were doing and tuned in.  Words are simply inadequate so others reading this will have to add in.

We also recall the role that Magic played in sparking the infamous bridge wars between the Bronx via KRS and BDP and Queens via the Juice Crew. Magic was so important that if he didn’t play your record or publicly rejected you as he did BDP,  it wasn’t a thing to easily shake off.  I won’t get into along recounting of that tale, but lets just say a lot of careers were born through the BDP vs Juice Crew saga. The attention he garnered help heighten the position of than rival DJ Red Alert who was holding it down and backing BDP on Kiss FM while Magic backed Marley Marlwho was his official deejay along with the Juice Crew as we know them today on WBLS…Also on a side note lets stress the fact that the battle was more like a battle of the bands and not the type of vicious beefs where folks get shot or beaten up. It was competitive, theatrical and capitivating

So many memories its hard to really do justice. .. For those who remember Mr Magic please share.

In closing I’d be wrong not to point out the 800 pound gorilla in the room. I’m talking healthcare. I’m not sure what Magic’s finances or personal situation was, but dying of a heart attack while in your 50s is not a good look and should be a wake up call for us all on a number of levels. One one level is for us to seriously look at how we’re living. Stress and strife are taking its toll. Stress from finances, stress from work, stress from living in dangerous situations silently and suddenly do us in.  On another level, many of us have not taken care of ourselves with routine check ups and visits to the doctor to help us avoid such tragedies. We shouldn’t forget as Skillz points out that it was only a few years ago that Magic’s DJ Marley Marl had a heart attack. We also lost Professor Xwho was also around the same age through meningitis.   Was it lack of health insurance or bad and fast living? I can’t call it, but all of us need to sit back and ask why we have lost so many people at young ages this year. It hasn’t been shootings its been failing health..

Hip Hop pioneer Kurtis Blow reminded us that Mr Magic put a record  Its a rare gem and it has him rapping. Its called “Its a Better Way’