The Black Is Back Coalition for Social Justice, Peace and Reparations

Washington, D.C. – A newly-formed Black coalition has announced a Rally and March on the White House to take place November 7, 2009 beginning in Washington, D.C.’s historic Malcolm X Park. The Rally and March are to protest the expanding U.S. wars and other policy initiatives that unfairly African and other oppressed people around the world. Known as the Black is Back Coalition for Social Justice, Peace and Reparations, the coalition formed on September 12, 2009 during a meeting in Washington, D.C. of more than fifteen activists from various Black organizations, institutions and communities.

The Black is Back Coalition aims to draw upon the support of many of the leading anti-imperialist organizations, journalists, organizers, artists and scholars of the African world. In this age of Obama, Rally and March on November 7, 2009 aims to bring back the tradition of resistance historically associated to with Black communities around the world. Comprised of seasoned veterans of Black political struggle, consisting of members of the African People’s Socialist Party, the NAACP, MOVE, the Green Party, Black Agenda Report and many other grassroots organizations and efforts, this coalition is perfectly situated to do just that.

As the Call to Action states, “Many well-meaning people in this country and around the world are afraid to take more progressive political positions for fear of being seen as anti-Black…We need to remind people of the absolute lack of ‘progress’ since new faces assumed leadership of this nation. Many of the leading concerns of Black people, Latinos and working people in this country remain insufficiently addressed. Black and Brown people continue to suffer the brunt of un/under-employment and predatory loan scandal crises. Military spending under Obama has increased as have the warfare this nation continues to export to Iraq, Afghanistan, Pakistan, Venezuela and Colombia. Mass incarceration, police brutality and political imprisonment remain rampant and the most negatively impacted by the levee breech in post-Katrina New Orleans continue to be without homes, jobs or health care assistance. And to that point, these are precisely the communities who nationally will be the most negatively effected by yet another myth of health care ‘reform.'”

The political paralysis now being experienced by anti-war and other progressive movements suffer from thelack of a Black-led anti-imperial movement to off-set the traps set by Obama’s so-called “post-racial” politics that perpetuates the same oppressive militarist agenda well known during the Bush regime. Black Is Back is not simply a slogan for the African Diaspora but for all progressive struggles which have historically always benefited fromBlack-led movements. On November 7, 2009 beginning promptly at 10am, all are welcome to participate in Rally and March which will include many speakers and performers of the coalition to stand and demonstrate in political solidarity announcing the return to leadership of the world’s most reliably anti-war and pro-social justice communities. As the coalition says, “To free our people’s hopes and dreams from oblivion, we need a coalition dedicated to the proposition that Black is Back!”

Black is Back Steering Committee:

Other Members of the Black is Back Coalition: 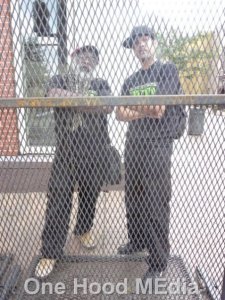 This is footage taken on September 22, 2009 the day before the G-20 Summit officially hit Pittsburgh. This video show the incredible extent the City of Pittsburgh went to lock down the city and prevent anyone especially protesters from coming into downtown. With metal fences surrounding it’s perimeter Pittsburgh has once again become the City of Steel. The Legendary Jimi Hendrix provides the theme music. 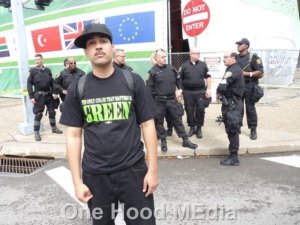 This video was taken Wednesday September 23rd the day before the G-20 summit began in Pittsburgh over a span of an hour. The police and military deployment numbers were compounded by the fact that there was so few “regular” people in downtown Pittsburgh due to the fear people had of protesters “tearing up” the city. The irony was that all around the city are signs that say, “Pittsburgh Welcomes the World” yet the intimidating presence of so many police had the exact opposite effect. When we came across the bridge into downtown, police immediately began to take our pictures, which is why I used a song I record called “Watch Em” featuring K-Link as the soundtrack. As I write this police are firing tear gas at a protesters marching without a permit. Crazy.

I am just arriving in Pittsburgh this Friday morning as folks are gearing up for this morning’s huge protest which starts around 12 noon.. Just spoke to my man Paradise Gray of X-Clan and One Hood.. who has been on the ground covering the haps like there’s no tomorrow.. He just alerted me to two disturbing things.. First, the police used some sort of ‘noise weapon’ on crowds yesterday. You can see it pictured on top of the tank in the photo below. It’s a loud irritating noise and makes people want to leave an area almost immediately.. We will gather more information on this later today..

The second disturbing thing is that police have been aggressively filming and making their presence known to Gray and other One Hood members. Paradise describes police officers he had never seen before walking near him and saying his name. One officer told him he’s been reading his blogs and reports.. Pittsburgh is definitely on lock down and a total police state. You could see that driving into the city… Follow the tweets and Facebook blogs as we will be updating all day..

PittsburghMayor Luke Ravenstahlsaid that the level of security that we are seeing in the streets of Pittsburgh is normal for the G20 and these type of events, however I am from New York and have never seem a city locked down like Pittsburgh is locked down right now. The city is like a ghost town right now. Boarded up businesses and residents afraid to leave their homes for media driven fear of the protesters or intimidation from the massive display of military power by an occupying force that looks like a scene from “Clone Wars” in the Star Wars Universe. It’s ironic that with the amount of metal cages surrounding the David L. Lawrence Convention Center and Downtown Pittsburgh our city can once again can make the claim of “Steel City”. Way to run “The Steel Curtain Defense” Pittsburgh!

I was at a March in the Lawrenceville neighborhood of Pittsburgh today and I saw one of the largest gatherings of Police/troops that I have ever seen domestically, I saw nothing like what I saw today at the The United Nations, The Million Man March, The Millions More Movement, nor President Obama’s Inauguration. I haven’t seen anything like this in Post 911 New York. Sheer numbers of heavily armed officers in full riot gear, complex tactical crowd dispersal maneuvers, flash bangs, tear gas and cutting edge audio technology were used to totally smash the un-authorized protest.

I can’t wait to see the numbers of lost money by the downtown business’s that the city begged to stay open during the G20 summit only to see their customers “fenced off”.

$20 Million for G20 security, nothing for the “Woman’s Walk For Peace” on Oct. 3rd on the North Side. http://www.womenswalk.org